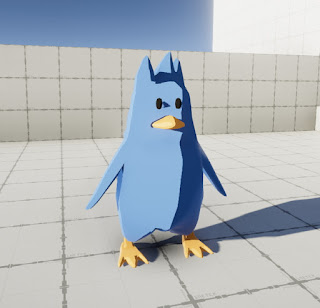 It's been a while since our first post announcing Gween, so I thought I'd give an update on how things have been progressing since then. We've been very busy with the game since the last update and are almost ready to start introducing our first prototype levels and combat mechanics!

The primary focus with development so far has been creating the movement system for Gween, and experimenting with different possible behaviours for moving. We want the movement set to reflect Gween's character and bring out his personality, so a lot of attention has been given to the fact Gween is a penguin with the way that he moves and interacts with objects. Here is what we have so far:

We wanted to start experimenting with procedural animations, and for this we needed a new model with a new rig. We've been exploring different types of lighting for Gween, including toon lighting. Honestly, he has never looked so good!

Gween now has adorable flipper sounds. You can check them out in the video below. They aren't final and we will be completely remaking them in the future, but they already add a lot of character to Gween.

Inspired by Super Mario Odyssey, We wanted to add depth to Gween's movement by allowing players to combine different inputs to create new and unique ways to travel. For example:

Sliding into a jump increases the length of a jump.

Diving during a jump makes you jump further (and faster).

We have put a massive amount of time into the swimming mechanic of Gween, studying the pitfalls of other games and how they fail to deliver satisfying water mechanics. For example, they usually slow the player down, restrict the player's freedom, and put them under stressful time limits. In the case of Gween, we want swimming to be the most satisfying mechanic -especially seeing how that's when a penguin is most agile in the wild.

Not only have we made the player faster and more nimble underwater, but the underwater areas take advantage of the lack of gravity to create interesting new takes on level and puzzle design. Don't get fooled into thinking Gween is completely safe though, there are still things lurking in the depths!

To complement the new swimming mechanic, we've added in our very own buoyancy physics into the game! Gween will be able to do things such as push objects into water to make floating platforms, raise and lower water levels to change the height of objects, and solve physics-based puzzles. We're very excited about this new feature.

One last new feature we've added (and my personal favourite) is a little touch to Gween's character. Penguins aren't the most nimble creatures on land, and Gween is no exception to this harsh fact of life. If the player lands a dive too hard, you're rewarded with a hilarious stunned penguin!

If you have any ideas, suggestions, or just want to keep up to date, join us on our Discord:
https://discord.gg/W42wnWc

We really appreciate you reading our blog and following our project. Don't forget to tell your friends about Gween!

Have a great day,

- The Folks at Loui Studios

Popular posts from this blog

Gween the penguin After finishing our first Steam game last year, there were many suggestions for what should come next. What was it going to be? We toyed with many ideas before our main artist, Jun, suggested Gween. We're still very much in the early stages of development, but wanted to share with you what we have so far... About Gween Gween is the name of a platformer about the only penguin in existence. Gween the penguin lives in an icy tundra populated by all sorts of things that like to eat penguins. Not wanting to be eaten, he spends his days inside his igloo, painting and watching TV.  One day, signal to his TV cuts out and he travels outside to fix the problem, instead getting sucked into wild new adventures with his flying fish friend, Filip. Gween and Filip  Gween moves like a penguin. He waddles around, slides on his belly, and swims gracefully. He can't fly. Penguins can't fly. But if Gween really tries, he might just be able to hover. He goes a lot of places
Read more